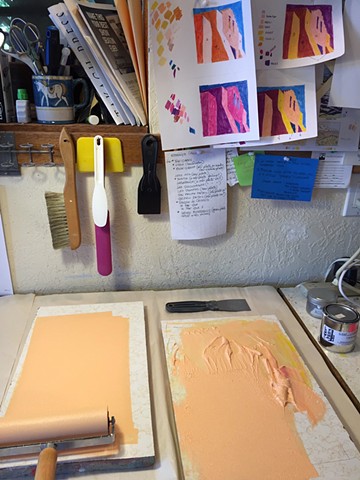 Artists such as Picasso (1881-1973) and Matisse (1869-1954) were also exponents of the linocut. Picasso produced his first linocuts in 1939 and continued to push the technical boundaries of the material until the early 1960s. He made complicated multicolor works that culminated in the creation of a process to create multicolor prints taken from one linoblock. The "reduction" or "elimination" process involves the gradual cutting and reworking of the block, the image on the lino being continually reduced in accordance with the color requirements. At each stage, the block is reprinted, the ink being overlaid on the final print until the image us compete. Editioning has to take place at each color stage as the resulting block is unusable at the close of the process because the image has been vastly reduced. from "The Printmaking Bible", by Hughes and Morris